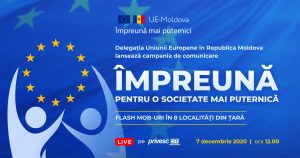 On the occasion of the International Human Rights Day, will be carried out an extensive public awareness campaign on human rights and civil society , an activity that is launched by the Delegation of the European Union to the Republic of Moldova.
The “EU-Moldova: Together for a Stronger Society” campaign will be largely online and will start with eight flash mobs organized, on the same day and at the same time, in various parts of the country by Euroclub members, and of the Information Centers of the European Union.
The launch event of the campaign will take place on the Privesc.eu platform, on Monday, December 7, at 12.00.